In 1988, Stephen Hawking’s runaway bestseller A Brief History of Time made history in making astrophysics accessible to everyone. Relativity, black holes and multi-dimensional physics were no longer some ivory tower subject. He would follow the book up with others, but none had the same effect. Then came the The Grand Design in 2010 which claimed science had banished God. In the process, the eminent scientist apparently left the world of science and entered scientism. Oxford mathematician John C. Lennox details this fall in God and Stephen Hawking.

Hawking begins his argument by claiming philosophy is dead and suggesting science is the root of all knowledge – itself a philosophical statement. Other scientists before him – like Carl Sagan and Richard Dawkins – have also fallen into this trap. So enamored by the promise and power and science, they have made it a religion. Ironic for professing atheists. Nevertheless, Hawking also seems now very willing to abandon science.

Lennox goes into much more detail, but Hawking contradicts himself in “asserting that the universe is created from nothing and from something – not a very promising start.” Then he says the universe creates itself. Then gravity somehow explains the universe’s existence as if it was a Creator. Lennox concludes, “…the main conclusion of the book turns out not simply to be a self-contradiction…but to be a triple self-contradiction.”

It appears that Hawking, so bent to justify his belief in no God, has abandoned his previously astute scientific understanding no matter how ridiculous. His “science” and reasoning in this latest book has been criticized by many. To be fair, this scientism of his and other scientist “celebrities” like him, has been challenged by even those who share his beliefs on God. All belief systems have those who tumble into irrationality. And as Lennox writes, “What this all goes to show is that nonsense remains nonsense, even when talked by world-famous scientists.”

So what’s the point? We shouldn’t be taking claims from “authorities” blindly. In today’s 24/7 news cycle especially, where sound bites take the place of true discussion, we need not be quick to nod our heads in agreement. Whether scientists, politicians or “experts,” we need to think, reason and test. Even authorities err, experts disagree and much ado can be made about nothing. Hawking’s earlier books are still some of the best. But this one? It’s a shame that Hawking has abandoned the science he once championed, but it serves as a lesson for all of us.

Nonsense is constantly trying to overwhelm us, but we don’t have to let it win. 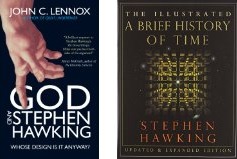