It is said that if we ignore history, we will repeat it. How can we follow this quintessential maxim if we allow people to erase or rewrite history?

Recently, Charlottesville City in Virginia, voted to tear down a statue of Robert E. Lee at a cost of $300,000. Once councilman claimed it was “delusional”  to believe anything different than the “Confederate states had as their primary aim the preservation of a way of life in which enslaved humans.”

No, Councilman, your statement is a rewrite of history.

There were those who wanted to preserve slavery, but Lee was not one of them, he wrote before the war (as quoted by H.W. Crocker III): “In this enlightened age…slavery as an institution, is a moral and political evil…” and “emancipation will sooner result from the mild and melting influence of Christianity than from the storms and contests of fiery controversy.”  Lee would also free his inherited slaves before the Emancipation Proclamation and argue for the South to abolish slavery during the war. Lee was loyal to Virginia, and when it seceded he went “to her defence” but still hoped that “wisdom and patriotism of the nation will yet save it.”

He believed in the United States of America, but also the right that every state understood when they joined the Union: The right to leave. To consider Lee a symbol of racism or slavery is what is delusional. Ignoring history also makes it easy to avoid the question that few every want to ask:

Was there not a better way to end slavery and preserve the Union that didn’t result in the deaths of at least 620,000 Americans (and maybe as many as 850,000)? END_OF_DOCUMENT_TOKEN_TO_BE_REPLACED

If I may digress a bit, the news often gives insight into the minds of people or, perhaps, what they are not thinking. This week, apparently a lot of people think the Confederate flag causes racism and violence and removing it will someone how cause evil to disappear. Others are happy the government is providing them healthcare – this is the same government that has mismanaged and bankrupted every other social help program. And apparently many think they need the government to define marriage for them. Perhaps the government should stay out of the relationship business – and groups/people/etc. should stop inviting them in. While all of that was going on, I think many missed this: 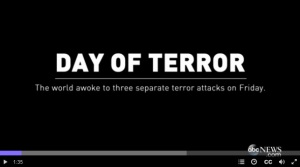 Not that those other issues are unimportant, and they badly need adult discussion rather than sound bite drive-bys, but are our priorities correct or is Rome burning as we fiddle away?