It’s National Preparedness Month and I can’t help to wonder why something so simple is so overlooked by many. Just look how quickly shelves went bare a few weeks ago when water supplies went bad in northern Ohio. Or how people wipe out the bread, milk and toilet paper in the face of a two day snow storm.

Sometimes I wonder how civilization made it this far. What would happen in a far larger, sustained disaster? It doesn’t take much time or money to prepare. I don’t mean you have to be one of those hardcore prepper types, but could you and your family make it a few days without electricity and access to stores? Would your life break down and spiral out of control without a phone and the internet? What would you eat and drink? If it is winter, how would you heat?

Fiction is littered with apocalyptic tales of survival. These imagine what would happen in a complete collapse. What attracts so many to these tales is that they are way to explore the best, and worst, in man. 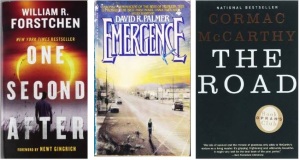 They also serve as a warning: Pay attention. Don’t get lost in the useless and let others be responsible for the direction of yourself, your nation or humanity. Don’t take life for granted. Many a civilization has fallen, ones far older than our own. We think ourselves as unsurpassed in intelligence and greatness.

Like Loading...
Categories: Books, Fiction, What You Can Do, Writing | Tags: apocalyptic, be prepared, Cody Lundin, Emergence, One Second After, prepare, survival, The Road | Leave a comment

If I may return to our fiction review for a moment, 2012 seems to be an apt time to take in an apocalyptic tale or two. I’ve previously discussed the amusement I have with the 2012 doomsayers, not unlike Y2K (over a decade ago already!).

First ask yourself this: What would you do if you were faced with a major disaster? In particular, are you prepared for what may happen tomorrow, next year or an hour from now? Tornado? Earthquake? Some man-made cataclysm?

We’ve become such a pampered society, we think buying bread, milk and toilet paper is how to prepare for a coming storm. Most have no idea what do do if their power went out for more than a few hours. They think the government will be there to save them (forget Hurricane Katrina already?).

This lack of common sense preparedness – the classic Boy Scout motto “Be Prepared” said it best and simplest – will someday haunt us. That’s why I recommend folks give the novel One Second After a read.

It presents the most extreme scenario: An EMP attack on the U.S. renders nearly all electronics useless. If you don’t know what an EMP attack is, look it up. It is a real threat. Perhaps the government should worry more about this than meddling in our lives. In any case, William R. Forstchen paints a dire situation as a small town tries to survive until help arrives. It does arrive, over a year later. In the meantime, the realities of a collapsed society unfold in frightening detail.

Hopefully, we never see a disaster of this magnitude. Even smaller ones could push us to the brink. The Yellowstone supervolcano, the long overdue mega-earthquake along the fault near the Mississippi or some terrible nightmare set in motion by a depraved mind all lurk in the darkness. Then again, they may never happen.

This novel, entertaining as it is, will make you ponder what you would do. Though-provoking and perhaps extreme at times (we hope it is), it nevertheless may help snap a couple people out of their funk.

Don’t let laziness be the death of you.

Harvest Season: A Message from the Past

Autumn is in full swing in the Northern Hemisphere, but you really can’t appreciate it unless you live somewhere where the leaves are changing. Fall is a great season full of history. It is also the time to spend as much time outside before winter sets in. Sure, winter has its own history and traditions, but halfway through it you are ready for it to be over. Fall, on the other hand, is often way too short.

One of the season’s highlights is the focus on harvest and the related festivals. Yes, we all enjoy these, especially Thanksgiving, though by then it often feels like winter. In the past these events took on great importance as people stocked up for winter and enjoyed the transitional temps while they lasted. But I wonder if people should pay some more attention to the harvest season like they once did.

We are so used to walking into Wal-Mart and buying our food and have no clue where it comes from. Nor do we know what’s in it and we waste it by the ton. What happens if we face a natural or man-made catastrophe? Or even a temporary (few month long) problem with food supplies? And what would people do if they couldn’t get fruit year-round anymore like back in the day?

Maybe people should use this season to learn to be a little more self-reliant. Figure out what they would do if they couldn’t get to the store for a few days. I’m not talking about building bunkers here, but most people would be at a complete loss. Do you have a back-up heat source? Water? Food for a couple days? It’s really common sense, but we have become so pampered we think buying milk, bread and toliet paper is all the survival skills we need.

Our ancestors knew to plan ahead. Their lives depended on it. Sadly, most people today don’t realize that just one small hiccup can change everything.

P.S. If you read the link above about the tons of food we waste, I hope you also conclude that there should be no hungry people in this world. Perhaps this season, as it often has, should be used by everyone to find ways to waste less and share more.