Remember 1981? Yes, it’s a bit fuzzy at this point, but that was the year that manned spaceflight became normal. On the 21st of April, the Space Shuttle Columbia rocketed into orbit. Over the next 30 years, 135 launches were made by the fleet. For the generations who grew up or were born during this era, astronauts traveling to and living in space (on board the International Space Station) became commonplace. This normalcy hid the difficulty and danger that were behind the curtain.

Rowland White‘s Into the Black recounts the epic effort to design and launch the shuttle. It took nearly as long and was every bit as difficult as the Apollo program. In some ways it was more so: Apollo components had to work once; the Shuttles had to survive the rigors of launch and space over and over.

White recounts how the shuttle program was the final project of the Apollo veterans. It was also a fusion of a canceled military space program – complete with astronauts and launch sites – that would be combined with the civilian side.  Technologies such as reusable rocket engines and protection from reentry were beyond state of the art. The drama that unfolded was every bit as exciting as what was told in From Earth to the Moon and Apollo 13.

Danger was never eliminated, but the later losses of the Challenger and Columbia were not, ironically, cause by failures of the orbiters. None of the shuttles ever failed, repeatedly surviving launch stresses and harsh environments that those of us earthbound cannot imagine.

While the shuttles never flew as frequently as envisioned, nor brought the costs of launch down, history will look back on them as making possible what comes next. We are already seeing the turnover of spaceflight to private companies. The International Space Station that the shuttles enabled is an orbital spaceport on the verge of becoming the staging point for new ventures. The government and politics often got in their own way in opening the frontier, but as Into the Black details, the astronauts of the Space Shuttles swung that door wide open. 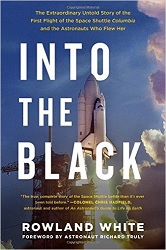