Warnings From the Third Reich

During the 1990s, as 50th year anniversaries of World War II began to come around, accounts of the war filled bookstores, television and film. Veterans who had said little for decades were now telling their stories. Some have wondered why in the years since so much attention has focused on studying Hitler. His motivations. His past. Attempt after attempt to figure out why and how he rose to power. Some think the attention is overdone.

The focus on Hitler isn’t entirely about him. It is also very much about the place. In 1945, as the Germans looked around them at their destroyed nation, more than one had to ask, “How did it come to this?”

Indeed, that is why Hitler and his Reich are studied so much. It all unfolded in nation made up of people very much like us.

Sure World War I, social chaos and the wild economies of the 1930s set the stage for Hitler’s rise. But Germany wasn’t a backwater, tribal nation ripe for a dictator. Germany was a sophisticated western nation with a deep history and a society of technology, intellect and culture.

Yet Hitler still led them down a path of ruin where tens of millions would die. He led a Reich that excelled in horror, destruction and death.

This is why the story of Hitler must be studied and remembered. Evil just doesn’t rise in nations of radicals and extremists. Do yourself a favor and check out the course, History of Hitler’s Empire or this classic volume.

And here look at the philosophies that gave rise to the Reich, which are growing again in our world: 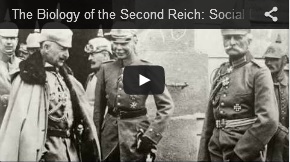 More on those troubling times can be read here. Be vigilant, because wherever you live in this world, do not think evil cannot arise there and take hold. Make sure you don’t ever find yourself in the position to ask, “How did it come to this?”

2 thoughts on “Warnings From the Third Reich”